I love to write about fashion in the Soviet Union, I have already wrote a post Soviet fashion during 1960-1980 where I gave a general idea and overview, but in this post I want to write about 70s.

This article is based on my mother’s memories of that time and family albums and Internet sources.

In 70’s the most desirable items were long boots (Remember this cult scene from the “Office Romance” with the boots?), stockings, roll-neck sweater, bell-bottoms, preferably denim, dresses of colorful colors, checkered patterns, crimplene and other artificial materials.

Bell bottomed styles were the most preferable.

By the end of the 70’s following Barbara Brylska heroine example (The Irony of Fate, or Enjoy your Banya!) fur hats became very trendy. Fox fur hats were especially popular!

Folk style (at the moment called a la russe) was very welcomed as well!

Soviet fashionistas plucked eyebrows into very thin ones, painted eyelashes quite heavily and put a bright lipstick with a gloss effect! 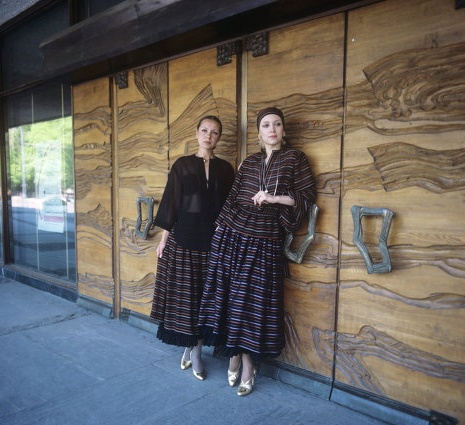